Pseudo Feminism A Wrong Projection Of A Cultural Moment.

Pseudo Feminism A Wrong Projection Of A Cultural Moment.

Do you believe in the rights of an individual?

Hence, you believe in feminism.

According to the verified sources, this word's literal meaning is “the belief that women should have the same rights and opportunities as men”, isn’t it the same as equality?

Of Course, it is.

But, some people had misunderstood the concept from,” being inequality” to “more rights to women”. This is where pseudo-feminism took birth.

Now you are thinking about how exactly it affects our lives.

Actually, it was a moment for rights for women.

So, a patriarchal society can be converted into a society with equal rights. But, converting feminism into pseudo feminism or by misunderstanding this will bring women to the top of society.

And will create a matriarchal society. Hence, no equality again in society.

This is what you need to understand that just the way you don't like fights over culture or different religion. You must not fight over different genders in the name of rights. The first wave of feminism took place in the late nineteenth and early twentieth centuries, emerging out of an environment of urban industrialism and liberal, socialist politics. The goal of this wave was to open up opportunities for women, with a focus on suffrage.

Now, one question arises when people start discussing or promoting feminism by converting it into pseudo-feminism.

When and why pseudo feminism?

So, the reasons for the start of this moment of feminism were:

Women were getting exploited at working places, in the education field, in society, and women didn’t raise their voices towards it.

Let's talk in what context we are using this phrase “exploitation of women”, so, years back women at working places were not paid according to their work or skills but, based on gender.

If two people are working at a place. Mr. A and Mrs. S. and the actual pay for the work in a month should be 1000 so, the owner will pay the male member 1000 whereas he will pay 800 to the female member.

Parents were not allowing their daughters to study and even if they then higher studies were still a dream to the girls. 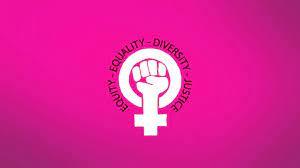 Females were suffered because of no-self

It started for strengthening and equality.

But, with a span of time things changed to a great extent and most women are now capable enough to raise their voice for their rights.

The first wave flowed in the late nineteenth century, and then it grew too early in the twentieth century. It came out from urban industrialization and liberal social politics. The motive of this wave was to bring opportunities for women as they were suffering a lot.

It was feminism, not pseudo feminism.

It began at the Seneca Falls convention in 1848 when approx 300 men and women came out of their homes to raise voice for women's rights. Elizabeth Cady Stanton was morally superior to everyone hence that presence made the moment worth it.

Does it get cultural support?

Now, we have to think about when and how this feminism got cultural support.

Human rights are universal. Yet, when we speak about human rights without naming specific people suffering from violence and discrimination, the discussion makes no sense. In today’s world, we deliberately combined LGBTQ+(#pride) rights and feminism because our organization brings people together for fighting both on gender equality and protection of LGBTQ+ (#pride) rights. The concept of human rights is that all people have equal rights, i.e. their rights are the same. It’s not to say that all people are the same. We have this interesting liberal background when everyone was equal in the community. But the truth is, communism is not about equality. The idea of equality was announced, but it only worked among poorer social groups, while the rich still lived with facilities. There was no real equality for all people.

Well, at first you need to understand that pseudo-feminism has nothing to do with feminism.

Pseudo-feminism is an exaggerated form of emotion that comes out during fighting for rights or raising a voice for rights. It is a complete misunderstanding of the term feminism and has brought a lot of toxicity to society.

See the feminism movement started for bringing equality but pseudo feminism always talks about the superiority of only one gender or supporting one at the extreme.

Feminism talks about equal rights whereas pseudo feminism breaks this belief in every toxic way. You can see thousands of examples around you that explain that men get exploited too or they were harassed just because some people believed in pseudo feminism and supported the female member more than the right and justice.

Even, pseudo-feminism is making people not believe in feminism too as they already conversed on that and that conversation ends at a toxic point, or the people who believe in pseudo-feminism go to the extreme toxic level to prove themselves right. Hence, it is affecting the main moment because people don't give rights to women or tries to exploit them due to this toxic feminist belief in society.

Whenever we discuss feminism or pseudo feminism we come to one conclusion only that this term is going out of track and now is not able to provide real support to women and to bring equality in society. Instead of this is now a reason for oral fights and toxic conversations in social groups which even creates differences in groups too.

You read this article to the deep down

What do you conclude?

Don't judge the moment with some small number of people trying to put it down from the mainstream.

Feminism should be changed to some other word, a word with the same meaning and same motive but no toxicity and wrong beliefs.